He has a Commonwealth Games silver medal, an Olympics appearance, a European Wallabies tour and 32 Super Rugby caps under his belt, and he's a Shute Shield champion too but now, at just 32, former Australian Sevens skipper Pat McCutcheon is... running the tee for Narromine?

That's not all he's doing at the Gorillas, of course, but seeing the former Waratahs ace with tee and water bottle in hand at Cale Oval of a Saturday does give a pretty good insight into what McCutcheon's all about having moved back to his hometown last year.

The Australian rugby landscape is considered tenuous and is often downtrodden, in an area like the Central West the impact a star like McCutcheon, or Dubbo's former Wallaby Beau Robinson as another example, can have is monumental on developmental and inspirational fronts.

Take Narromine's colts and second graders for example. How often would any of the Gorillas' players have had the chance to learn from and play alongside a former Super Rugby star, and another Shute Shield gun in his brother Lachlan? 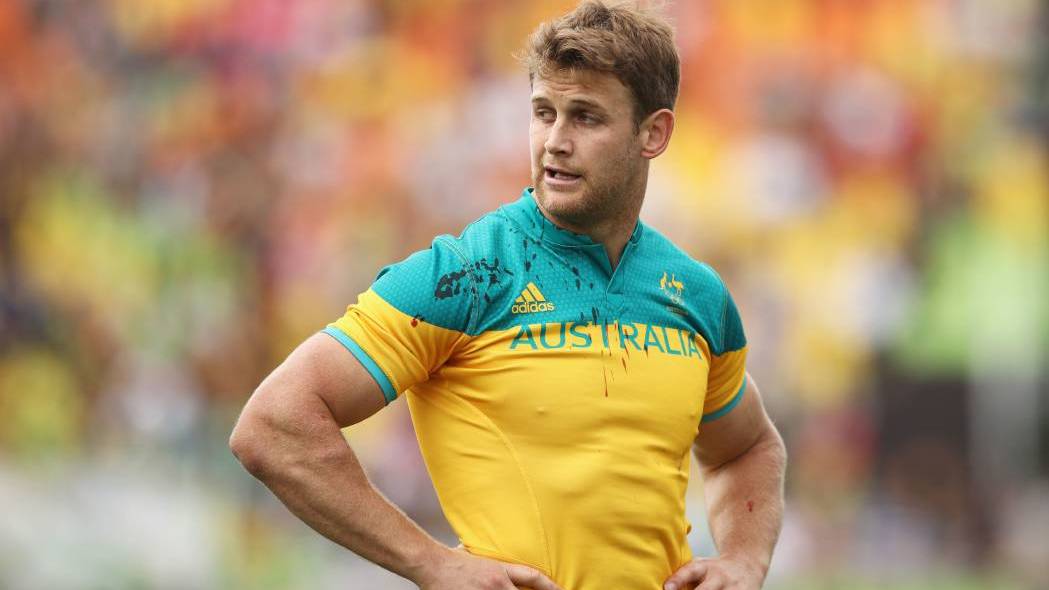 SIXES AND SEVENS: Pat McCutcheon during Australia's campaign at the 2016 Rio Olympic Games.

By no means is he trying to be Narromine or the Central West's knight in shining armour but with a lack of support from above, whether perceived or legitimate, being a major gripe in regional areas the chance to give back isn't lost on McCutcheon.

It's something he wants to do.

"I loved my time in the professional game and I'm really, really grateful to have had the opportunities I did, but I've had my time and now I've got the opportunity to potentially help influence the next generation of players, both men and women, and that's quite humbling," McCutcheon said.

Rugby hasn't stopped giving back to him either, he explained, even after bringing his professional career to an end in 2016 and then moving into the Waratahs' coaching system as the franchise's elite youth manager, a role in which he primarily mentored the up-and-coming under-20 players.

"Moving home to the farm is obviously very different having been in Sydney for the last 15, 16 years. People have said to me 'oh you're a country boy you must know how to do all the farm stuff', but it's really challenging because I left when I was 13, 14," McCutcheon explained.

"I love learning new things and having new challenges and a move home was always in the pipeline I think but coming back, I was basically new to town and the rugby club here was such a welcoming environment.

I've had my time and now I've got the opportunity to potentially help influence the next generation ... that's quite humbling.

"I rocked up and was welcomed with open arms, it's come full circle in a way and it was really comforting to come into that.

"So yeah, rugby's given me a lot I'm grateful for, so I'm doing my best to give back where I can."

That does include playing too, McCutcheon's kitted up for the Gorillas plenty of times this year, most of the club's New Holland Agriculture Cup rivals would be forgiven for being somewhat intimidated seeing his surname on Narromine's second grade team sheet too.

"I'm just having a trot when or if I'm needed, I'm really enjoying it. I've basically refused to play first grade though and it's a bit different playing five-eighth or in the centres but, without giving too much of my game-plan away, I'm actually trying to actively avoid the contact," he laughed. MENTORING ROLE: McCutcheon leads a training session in Newcastle in March last year, in his role bringing the Waratahs' up-and-comers through. Photo: AAP

"It's good being able to be back playing with Lach too. I actually don't think we've played too many minutes together this season but the last time we would have was probably back in 2007 or 2008 for Sydney Uni, so it's been 10 or so years.

"Where I only play when I'm needed Lach's happy to play, or sit on the bench for twos or ones and let the younger guys go. We head into training together on a Thursday night and we'll head down and grab a feed and a beer afterward too so it's not just playing.

"It is really nice to still be able to do that with him."

He does still don the green and gold of Australia every now and then too, again as part of his bid to give back. McCutcheon's regularly joined a host of other former superstars in the Classic Wallabies line-up, playing at Moree earlier this year and lining up against the Blue Bulls Legends at Orange's Endeavour Oval last year. 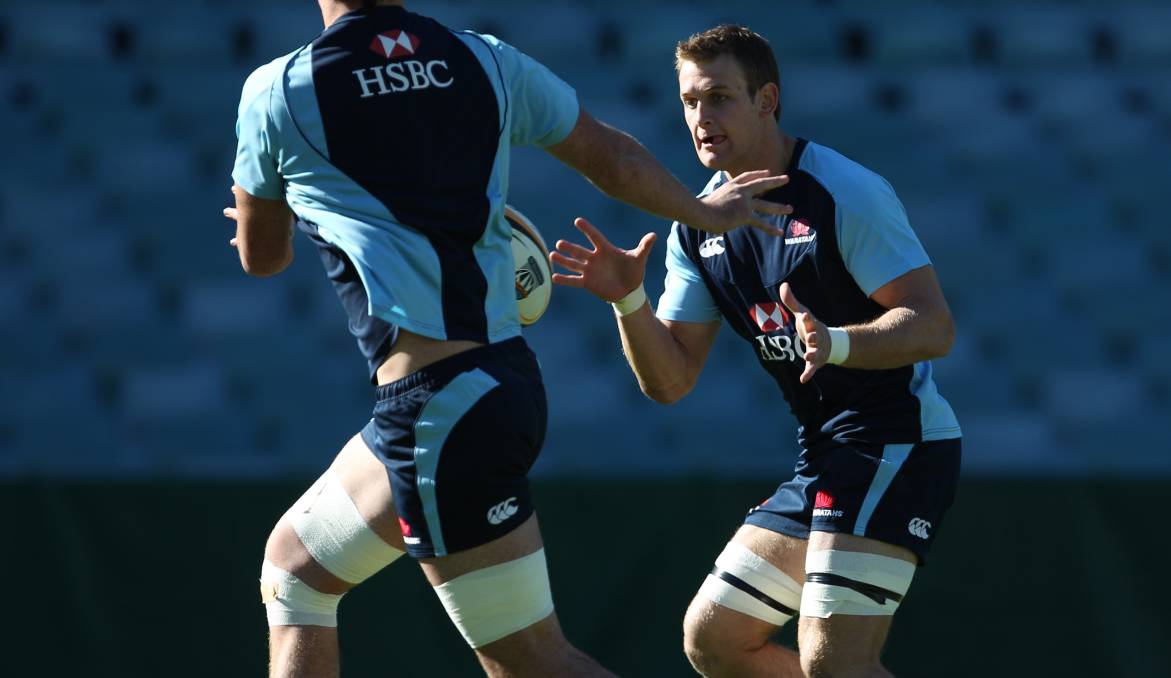 NSW STATE OF MIND: McCutcheon rolls through a training session with the Waratahs back in 2010. Photo: AAP

In fact when he spoke to the Central Western Daily he was on his way to Rockhampton to kit up for the Classics again.

"What the Classics are doing for regional areas, and for ex-players too, is really great. There's so many players involved and willing to be and that's what it's all about, it was great in Orange last year," he said, also looking beyond the playing field through his work with the NSW Positive Rugby Foundation.

"I play an ambassador style role with the NSW Positive Rugby Foundation. With Batyr we rolled out the Get Talkin' Tour in [the central west] last year to try and connect with people and address mental health problems in regional communities."

With his Gorillas looking on the road to first and second grade premierships this year McCutcheon has the chance to add another highlight to his already celebrated career, although it's not the trophies or the medals he has the fondest memories of. 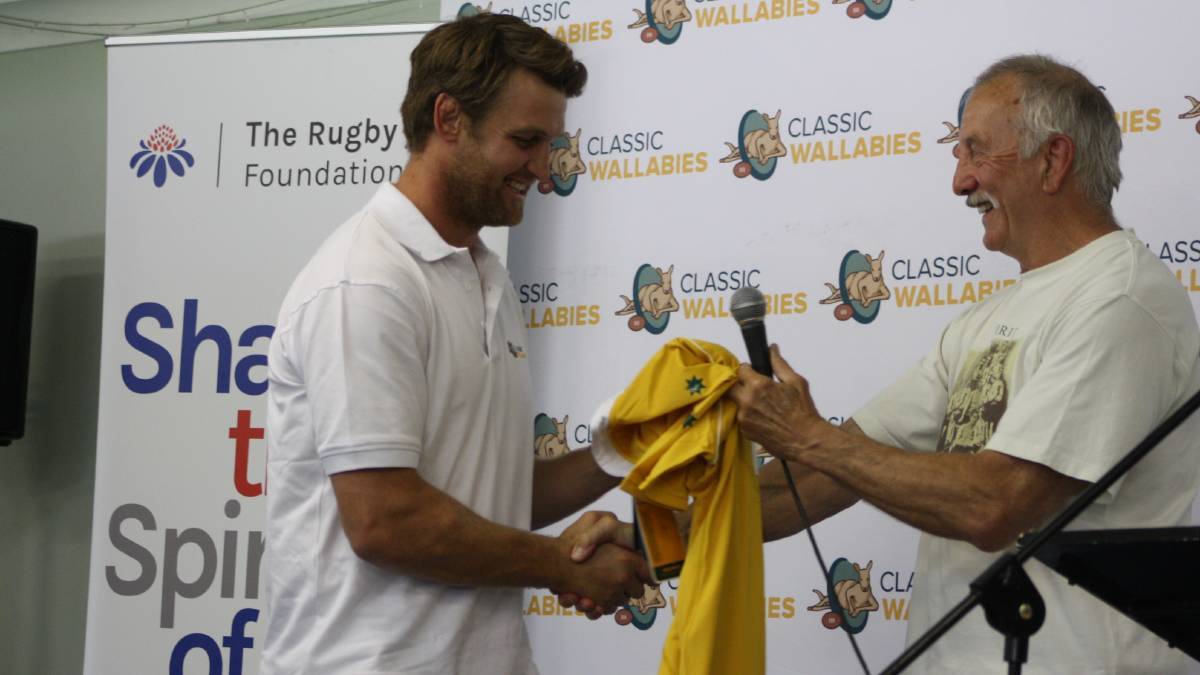 CLASSICS: McCutcheon is presented his Classic Wallabies jersey at Orange last year, where his side took on the Blue Bulls Legends. Photo: MICHELLE COOK

"In those terms it's probably being lucky enough to win a silver medal at the 2010 Commonwealth Games that's the highlight but, honestly, it's more about the people you meet and the friendships you make," he said.

"People have asked me if it was hard to retire and it was tough to finish playing which is probably part of the reason I'm still running around a bit at Narromine I think, but it's really about the clubs you play for and the people in them, those relationships are what makes it really special.

"That's the same whether it's at Narromine or those higher levels, I assume it's the same at all the other clubs in the region too, rugby has such a community and family feel in the country and there's a great culture out here."